What Is Tanzania Famous For? 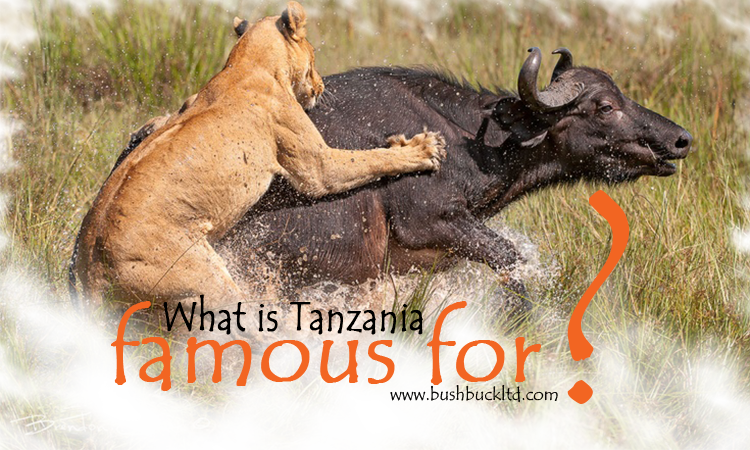 Tanzania is one of the world’s most favorite tourist destinations with no equal. The land holds a treasure of natural resources including exotic species of animals you won’t witness anywhere else. Here are some famous attractions in Tanzania:

Tanzania is widely known for its astonishing wildlife. In fact, more than a quarter of its land has been set aside for conservation purposes, with the Serengeti National Park taking the lead as one of the most mammal populated reserves in the country. While the national park is abundant with wildlife almost all around the year, the annual Great Migration is the greatest sight you will ever see with millions of animals trekking across the plains in an enormous hurdle.

Most noticeably, May is the best time to visit the park as at that time the grass becomes dry and exhausted and the animals start moving on, offering an extraordinary wildlife show.

The Ngorongoro Crater is known as the 8th wonder of the world. The inactive volcanic caldera has transformed into a natural amphitheater with walls towering at almost two thousand feet from the crater floor. Many animals migrate in and out if the crater but a majority of the species is present year round due to the rich soil and abundant water resources found inside the crater. During your visit, you are likely to encounter huge carnivores, such as lions and jackals, with many other different wild beasts.

The Mount Kilimanjaro is an inactive volcano located in the North-Eastern part of Tanzania, in close proximity to Kenya’s border. The mountain is Africa’s highest peak and is crowned the world’s highest free-standing mountain. The mountain is famous for its beautiful snow-capped peak that looms over the plains of the savannah. If you enjoy trekking, this mountain will present an exciting challenge for you.

Anybody who has never witnessed clear, turquoise blue water should pack their bags and off to Zanzibar Island, located in the Indian Ocean. The spot is one of the most breathtaking locations in the world. The shallow sandbars are perfect for wading where tourists can enjoy their day sunbathing or explore the World Heritage Site of Stone Town. The African island has been a top tourist attraction for centuries and has also been an important trading center.

If you are a fan of beaches, you are in for a treat if you head over to Tanzania. Spend your day lounging in the sun and enjoying the cool breeze on one of Tanzania’s beaches. The country is famous for its breathtakingly beautiful beaches with crystal-clear water and exotic shores. And when you are tired of lazing around, strap on scuba gear and head over to explore the reefs of the country’s islands where you will witness rare and striking fish and other marine creatures. Fishing is abundant as well so do not forget to pack your gear when you head over to the beach, especially if you enjoy fishing.