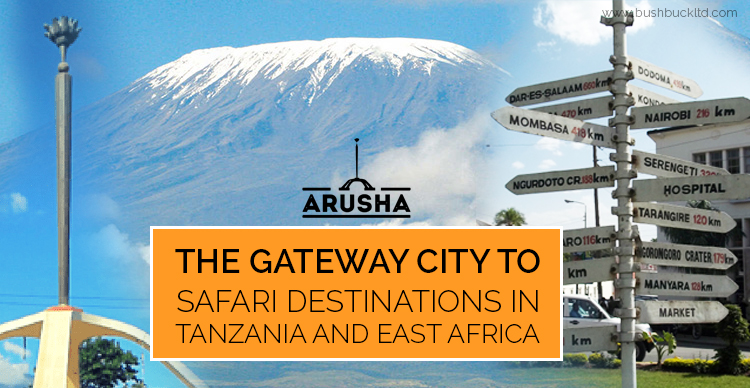 It is impossible to plan a trip to Tanzania without coming across the beautiful city of Arusha which is nestled between two separate mountains – Mount Kilimanjaro and Mount Meru. Arusha is not only a quintessential safari city, it is a gateway to most popular safari parks in the northern circuit. Often, tourists stop at the Arusha National Park before they continue their trips to other popular safari parks in the Northern circuit.

Here we’ll explore all that Arusha offers and the different ways tourists can maximize their stays in this gateway city. We’ll also disclose a few hacks about how to get to Arusha and what you need to plan a trip to this fast-growing city.

These airports have increased Arusha’s accessibility. Tourists can fly to their preferred safari destinations within a shorter time and at a lower travel cost. Again, visitors won’t have to worry about the extra costs of processing visas, especially if they take direct flights.

The public transportation hubs in Arusha are also very advanced. This simplifies the process of travelling to other major cities on the African continent.

The Arusha National Park attracts many tourists for a variety of reasons.

Because the Arusha National Park is en route to the most popular parks in the Northern circuit, visitors spend a night or two in Arusha. This enables them to explore the unique safari options available in the vibrant city.

Here are some safari ideas to consider while at the Arusha National Park:

The best time to visit the Arusha National Park is from June through September.

Arusha is an important gateway city in safari tourism. Tourists have to go through the city to most popular safari parks in the northern circuit.It’s the stopover city if you intend to witness a Great Migration in the Serengeti National Park or hike up the Mount Kilimanjaro or observe The Big Five in their natural habitats in the Ngorongoro Crater.

If you’re an elephant-conservationist, you definitely want to visit the Tarangire National Park near Arusha. Explore the untouched landscape of this uncrowded park. You might be lucky to watch elephant mud-bath as well. Tree-climbing lions, hunting leopards and buffaloes are often being sighted in this wildlife sanctuary.

In addition, this natural reserve is home to a wide variety of birds. Bird watchers may want to explore the exotic bird population in the Tarangire National Park. Flamingoes, eagles,robins, parrots and doves make up some of the striking birds available in the park forests.

While you’re in Arusha, you can hike up Mount Kilimanjaro using your preferred choice of routes to climb Kilimanjaro. It is the highest unconnected mountain in the whole wide world. This beautifully snow-capped peak is 5895 meters tall.

How To Get To Arusha (and tips to make your journey hassle-free):

Arusha is very accessible. You can reach Arusha as many international flights now fly to Kilimanjaro International Airport. Tourists often wrap up their safaris with a direct trip from Arusha to Zanzibar, where they can enjoy an exciting beach hideaway.

The Kilimanjaro International Airport (JRO) is the primary entryway to Arusha. This airport accommodates both international and domestic carriers. Safari parks are also accessible via light aircraft and safari vehicles. Tour consultants often make these arrangements. Be sure to state your preferences during booking.

To enter Arusha, you need to provide the following documents as specified by the government of Tanzania:

Arusha isn’t simply the perfect, fast-growing city where tourists pitch their tents and commence their safari getaways. This city also offers a potpourri of sights, sounds, tastes and fun activities.

Besides wildlife viewing, you can visit the museums and the clock tower circle. Shopping at the Central and Kilombero Market is something you should definitely try. Remember to relish the delicious Tanzanian meals served at the wide-range of restaurants Arusha. And oh, there’s something for snake lovers too – The Meserani Snake Park is always there to welcome snake aficionados with open arms.

Interested in visiting Arusha and all of the safari parks around it or wish to climb Kilimanjaro? – Book your safari here