An Insider’s Guide to Tanzania’s 10 Most Popular Landmarks 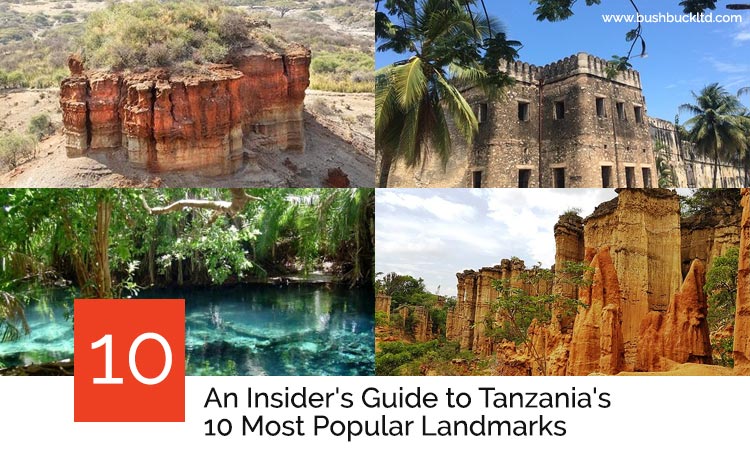 Tanzania – a great African country – is home to some of the biggest parks in the continent. The country has unique and varied landscapes that people will ever see. Tanzania sees millions of wild animals and birds make their way across the land in search of fresh meadowland and water.

Every year, thousands of people come to this beautiful African country. The purpose of their visit is to explore famous national attractions and parks such as the majestic Mount Kilimanjaro as well as wildlife and safaris related adventures.

Likewise, Tanzania is a scenic and breathtaking paradise for newly wedded couples. Some people call it a romantic holiday gateway. Renowned for its spice plantation, varied landscapes, wildlife, and fresh climate, Tanzania is a must-see for any tourist.

What are the 10 most popular landmarks in Tanzania? Let us tell you about them. We recommend you to read this article in a thorough manner so that you get the most out of it and enjoy your next trip to Tanzania!

Isimila is also known as one of the major Stone Age Sites in the world. It is located within erosion gulley “Korongo” on the Iringa plateau in Tanzania. This place is recognized as a special site when it comes to the understanding of behavioral plasticity and complexity of the human ancestors.

This site likewise features ancient tools dating back 50,000-100,000 years. There are eroded pillars, small canyons, as well as a small picnic area. You and your family can start the tour in a museum on site. Here, you can see all the unearthed fossils and tools.

Sultan Sayyad Sid built Mtoni Palace in 1828. Away from the hustle and bustle of Zanzibar Town and overlooking the coast, this place is a must-go for tourists while exploring Tanzania. Mtoni Palace was home to the Sultan’s wives and hundreds of children.

According to UNESCO, “Mtoni Palace Ruins” was once a beautiful building with a large garden and balconied exterior. There was a beautiful courtyard complete with gazelles and peacocks.

Today, there are only ruins and remains of the building. Here, you will find ruined roofless halls and arabesque arches, which give glimpses of an azure sea and tropical foliage.

Another important landmark in Tanzania – Olduvai Gorge holds the earliest evidence of human existence on earth. Paleoanthropologists have made substantial efforts for the last couple of decades and have found hundreds of stone tools and fossilized bones in this area, which dates back to millions of years. This shows that the evolution of human beings has started in Africa.

The Ngorongoro Crater is standing in Tanzania’s conservation area known as “Ngorongoro.”This is one of the most attractive places in Africa for tourists and many people come here to see the largest, unbroken, inactive, and unfilled volcanic caldera of the world. The eruption of a large volcano and its collapse on itself led to the formation of the great Ngorongoro Crater – about 2.5 million years ago. In 2015, it was declared as one of the seven natural wonders of Africa.

This fort is also called the “Arab Fort.” Ngomi Kongwe is a fortification located in the capital of Zanzibar “Stone Town.” It is one of the oldest buildings that attracts thousands of visitors every year. The Old Fort is located on the main seafront and adjacent to the House of Wonders (the former palace of the sultan) and facing the Forodhani Gardens.

It is the highest free-standing and tallest mountain in Africa. Mount Kilimanjaro has three large volcanic cones 1). Shira 2). Mawenzi 3). Kibo. Geological experts say that Shira and Mawenzi are extinct. However, Kibo, which is the highest peak is dormant and can erupt again. It is extremely dangerous to climb this mountain. Every year, the local and state authorities evacuate one-thousand people from the mountain. The primary cause of death on Mount Kilimanjaro is altitude sickness.

Serengeti National Park is one of the greatest and beautiful wilderness areas in the world. This place supports a wide range of diversity of animals such as leopard, lion, buffalo, elephant, and black rhino. Here, you will also see impala, Grant’s gazelle, giraffe, eland, topi, and kongoni.

Being the most extensive limestone caves, Amboni is a famous tourist attraction, which is located 8 kilometers north of Tanga City. These caves are 1.5 kilometers long and it is said that these were used as hiding places for people – making it a fascinating historical landmark in Tanzania.

You can’t really miss the Chemka Hot Springs in Tanzania. It is one of the most beautiful places in East Africa for tourists. Emanating from within the earth, Chemka Hot Springs have the geothermally warmed, fresh, and clean water. Foreign tourists find this place great for swimming. It is – without a shadow of the doubt – a pleasant place where you and your family can spend a couple of hours to relax and enjoy before and after the safari adventure.